The holiday-shortened week felt like anything of the sort.  Wall Street is back from summer break, and market action kicked right into high gear.  After three straight weeks of losses that saw the S&P 500 fall nearly 10% from its August 16th highs, the market rallied nicely on what appeared to be primarily negative news and hawkish central bank rhetoric.  The week also saw the death of Queen Elizabeth II and marked an end to the reign of a monarch who led with dignity and influence across the political spectrum.  The United Kingdom will mourn and celebrate the Queen’s life over the next few weeks.

Global central banks continued to tighten monetary policy.  This week, the Royal Bank of Australia, the European Central Bank, and the Bank of Canada increased rates.  The Bank of England announced it would postpone its policy meeting for two weeks as the country mourns.  However, it is widely expected that the BOE will increase its policy rate by 50 basis points. Notably, the new UK Prime Minster, Liz Truss, introduced a proposal this week that would cap energy bills for households and small businesses for the coming year at a potential cost of 170 billion Pounds. The move to increase fiscal stimulus while at the same time tightening monetary policy seems at odds and will likely warrant more debate.  More hawkish rhetoric from Fed Chairman J Powell and multiple Fed Presidents did little to hinder the market’s advance.  The Fed is expected to raise the Fed Funds rate by 75 basis points to 3.35%-3.5% on September 21st.

The S&P 500 rallied 3.6% for the week on what appears to be short-term oversold conditions and extreme levels of bearish sentiment.  Of note, the S&P 500 was able to regain its 50-day moving average after testing and holding the 3900 level. The Dow gained 2.7%, the NASDAQ bounced 4.1%, and the Russell 2000 increased by 4%. 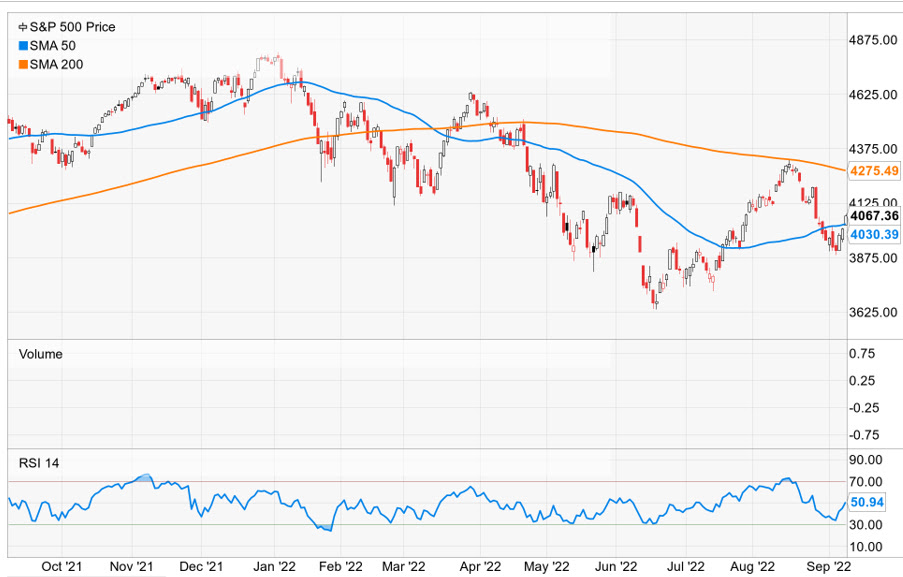 Action in the commodity markets continued to be influenced by Russia.  Oil prices fell early in the week as the EU could not establish price caps on Russian oil.  At the same time, Russia announced that its Nord Stream 1 pipeline would be closed indefinitely.  Putin was quoted saying, “Let Europe freeze.”  WTI prices ended the week little changed, losing $0.16 to close at $86.75 a barrel. Gold prices increased by $0.90 to 1726.10 an Oz.  The dollar continued its strength but fell hard on Friday, perhaps due to being technically overbought.  The greenback established 24-year highs against the Yen, 37-year highs against the British Pound, and 20-year highs against the Euro.

Investment advisory services offered through Foundations Investment Advisors, LLC (“FIA”), an SEC registered investment adviser. FIA’s Darren Leavitt authors this commentary which may include information and statistical data obtained from and/or prepared by third party sources that FIA deems reliable but in no way does FIA guarantee the accuracy or completeness.  All such third party information and statistical data contained herein is subject to change without notice.  Nothing herein constitutes legal, tax or investment advice or any recommendation that any security, portfolio of securities, or investment strategy is suitable for any specific person.  Personal investment advice can only be rendered after the engagement of FIA for services, execution of required documentation, including receipt of required disclosures.  All investments involvement risk and past performance is no guarantee of future results. For registration information on FIA, please go to https://adviserinfo.sec.gov/ and search by our firm name or by our CRD #175083. Advisory services are only offered to clients or prospective clients where FIA and its representatives are properly licensed or exempted.