September proved again to be a difficult month for financial assets.  A narrative that the growth of global economies has peaked was evident during the month.  Market sentiment was further dampened by fears that inflation has become persistent rather than transitory.  While still very accommodative, global central bank policy became a bit more restrictive with the rhetoric around tapering asset purchase programs and expectations of future rate hikes.  Washington continued to be in a stalemate concerning infrastructure spending and policy related to increasing the debt ceiling.  China continued its regulatory crackdown while one of the country’s largest land developers failed to make debt payments.  Technically, the S&P 500 broke down below its 50-day moving average, which may portend a more significant pullback.  Economic data was mixed over the month.  Employment data continued to trend in the right direction while sentiment indicators waned.  Housing continued to be a source of economic strength with better than expected data across the board, and ISM manufacturing and Services pointed to continued expansion. Inflation expectations increased during the month and were clearly reflected in the move of US Treasuries.  Prices at the producer and consumer levels increased on an overall basis and a core basis.  Headline PPI rose 0.7%, while core PPI increased 0.6%.  The year-over-year increase for PPI final demand was up 8.3%.  Headline CPI increased 0.3%, and core CPI rose 0.1%.  The year-over-year rise in CPI was 5.3%. The Fed has said that it is willing to let inflation run hot for a while to allow the labor market to recover. That said, the Fed indicated that it would most likely start tapering its asset purchase program in November, with the tapering concluding in Mid-2022.  Similarly, the ECB announced that it would begin to curb its asset purchasing program.  Additionally, the Fed’s median forecast of when the Fed Funds rate will increase was bumped up to the end of 2022, with the Fed Funds rate projected to be 1.75% in 2024. 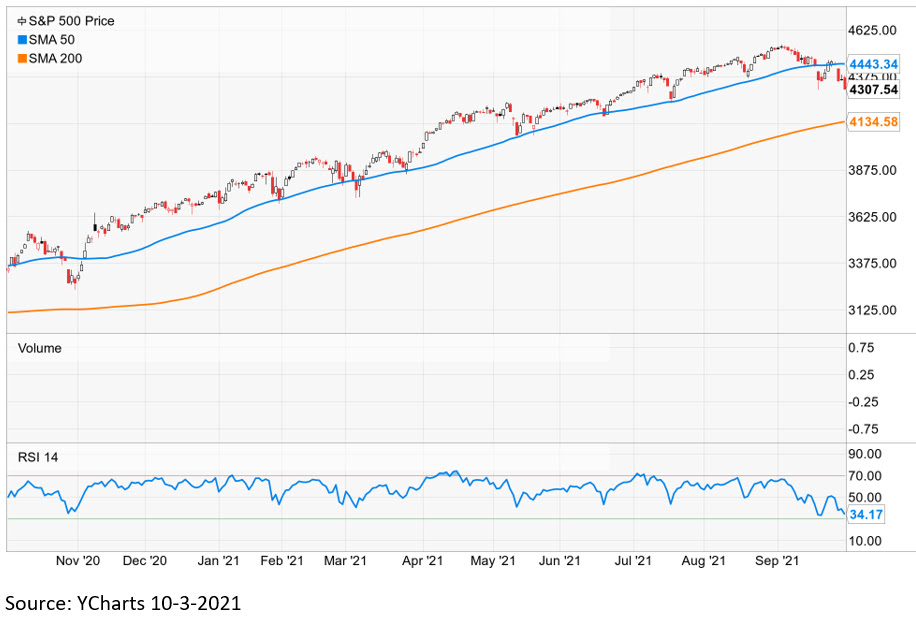 In Washington, politicians failed to get a deal done on infrastructure spending.  I guess it is not a surprise, but it certainly did not help the market. At the same time, investors face the possibility that the US government with reach its debt ceiling, which is forecast on October 18th.  Treasury Secretary Janet Yellen has warned of punishing consequences if the debt ceiling issues are not resolved. While I think it’s implausible that a breach will occur, it still is a variable that investors need to consider.

A missed debt payment by China’s most prominent land developed sent shockwaves through the market on concerns that the default could bring about a systemic failure to the global banking system.  Markets sold off hard on the news but were able to bounce once Wall Street realized the international bank exposure was minimal outside China.  Ironically the situation presents itself as Chinese regulators continued to crack down on specific market sectors and initiatives.

Technically, the market appears to be vulnerable.  The S&P 500 breached its 50-day moving average and then had a nice bounce, but subsequently failed again at that level.  The upcoming week will be critical to see if the index can regain that area of support or if it has now become an area of resistance.

Investment advisory services offered through Foundations Investment Advisors, LLC (“FIA”), an SEC registered investment adviser. FIA’s Darren Leavitt authors this commentary which may include information and statistical data obtained from and/or prepared by third party sources that FIA deems reliable but in no way does FIA guarantee the accuracy or completeness.  All such third party information and statistical data contained herein is subject to change without notice.  Nothing herein constitutes legal, tax or investment advice or any recommendation that any security, portfolio of securities, or investment strategy is suitable for any specific person.  Personal investment advice can only be rendered after the engagement of FIA for services, execution of required documentation, including receipt of required disclosures.  All investments involvement risk and past performance is no guarantee of future results. For registration information on FIA, please go to https://adviserinfo.sec.gov/ and search by our firm name or by our CRD #175083. Advisory services are only offered to clients or prospective clients where FIA and its representatives are properly licensed or exempted.