The financial markets continued to be volatile throughout June but were ultimately able to build upon May’s gains.  Optimism surrounding the reopening of the global economy fueled investor’s risk appetite for cyclical issues such as financials and airlines, while momentum in mega-cap technology issues remained.  Infection rates of Covid-19 in the US increased in some geographies and headlines regarding the rollback and delay of reopening in some states tempered investor enthusiasm at times.

At the same time, positive news on the development of a vaccine encouraged investor sentiment.  During the month, global central banks increased their efforts to maintain liquidity in the financial system and continued to call on governments to do their part with fiscal spending.  Economic data was generally pretty good and was highlighted by the progress made on job creation and the reduction of the unemployment rate.  For the month, the S&P 500 gained 1.46%, the Dow added 1.33%, the tech-heavy NASDAQ led gains with a 5.30% return, and the Russell 2000 increased by 2.56%.

Technically speaking, the S&P 500 was able to breach resistance at the 200 day moving average of 3100 and able to find support there on two separate retests.  The break above that level is a positive indicator for further gains in the market and caused a painful short-covering trade and also produced a sense of fear in missing out on the next move higher for those with cash on the sidelines.   2-year and 10-year US treasuries were unchanged for the month and closed with yields of 0.15% and 0.65%, respectively.  Gold gained 2.7% or $48 and closed at $1799 an Oz.  Oil traded 11% higher on the month and closed just shy of $40 a barrel as OPEC extended their production cuts for another month.  Emerging markets gained 3.60% for the month while developed international markets lagged a bit with EFA losing 0.16%. 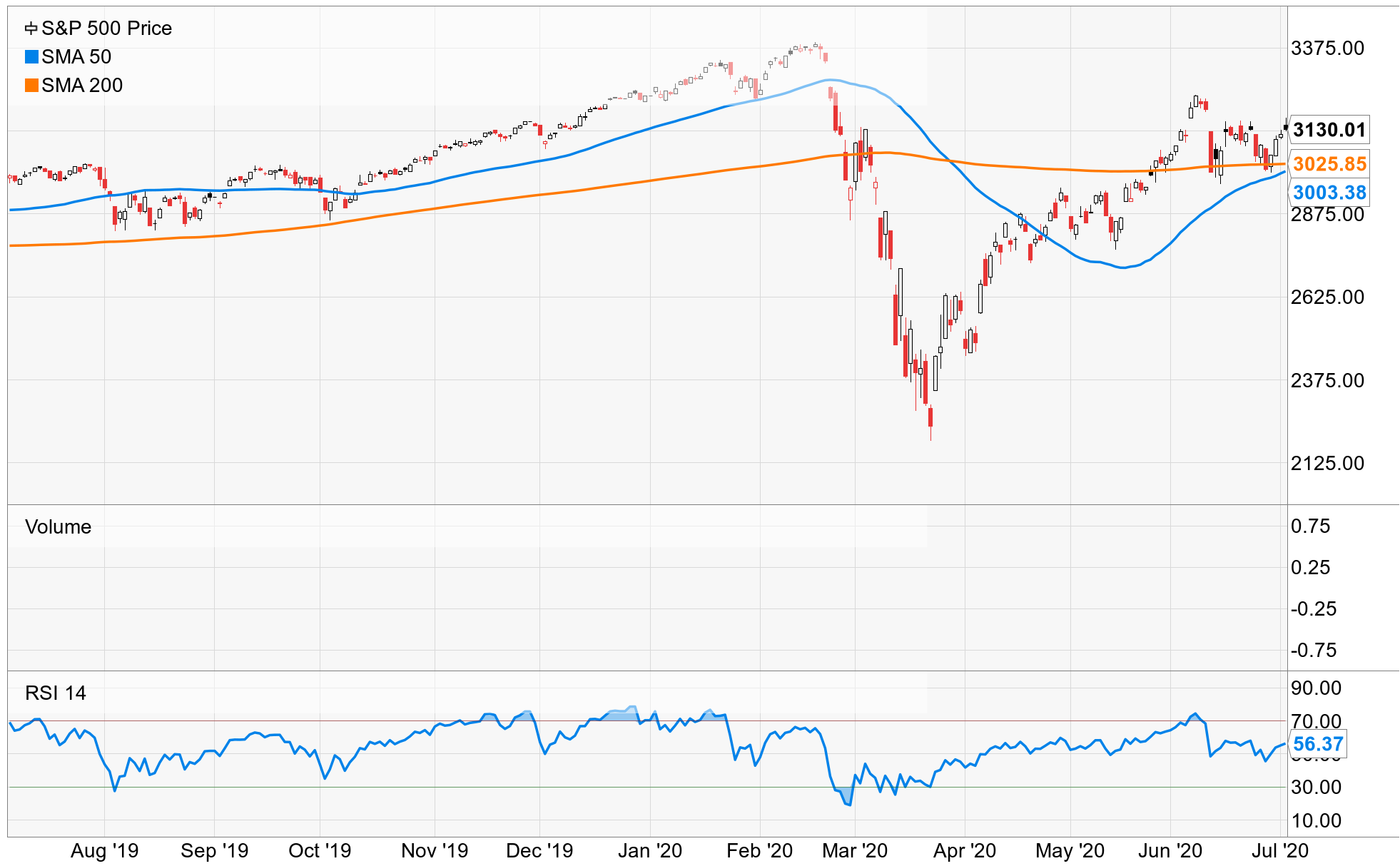 Investors seemed to toggle their interests between cyclical issues and the stalwart mega-cap technology companies during the month.  Financials rallied on news that the Federal Reserve would relax some of the Volcker rules that restricted investments in private equity and hedge funds.  The banks also went through their annual stress tests that were changed to incorporate some of the variables created by the Covid-19 pandemic.  The more sensitive tests showed that most banks continue to be well-capitalized. Still, in an “abundance of caution,” the Federal Reserve suggested that banks suspend their share buyback programs and their 3rd quarter dividends.

Interestingly, most banks decided to maintain their dividend and suspend their buybacks.  Airlines were quite volatile in June but were able to hold on to a good part of their sizeable gains.  American Airlines kicked off the rally with the announcement that it would be materially increasing its capacity in July.  The news induced other airlines to follow suit and increase their capacity.  Furthermore, TSA passenger traffic data seemed to confirm Americans are returning to air travel.  Mega-cap technology also was well bid throughout the month despite some companies cutting their advertising budgets with some social media platforms such as Facebook and Twitter.  Google, Amazon, Microsoft, NVidia, and Tesla inked nice gains as investors sought growth companies that have solid balance sheets.

The ebb and flow of coronavirus news continued to be prominent in headlines and in moving markets.  Infection rates of the virus in many parts of Europe and Asia appear to be subsiding, while rates appear to be increasing in some US states, Latin America, and India.  In Texas, Florida, Arizona, and California, local officials halted opening up further and, in some cases, actually rolled back some of their prior phase initiatives, which may inhibit some economic growth going forward.  Numerous vaccine candidates have emerged with a handful already in phase 3 human trials.  Data on the efficacy of these vaccines have also materially influenced the markets and sent many biotech companies shares soaring in June.

Global central banks were busy during June, adding more liquidity to the financial system.  The US Federal Reserve continued to be all in keeping the Fed Funds rate unchanged at 0-.25%.  The Fed’s dot plot, which lays out each Fed Governor’s rate expectations for the next few years, showed no rate hikes until 2023.  The Fed also announced that it would start to buy individual company bonds.  In Europe, the ECB added 600 million more euros to its quantitative easing program, which now sits at 1.35 trillion. Similarly, the Bank of England added 100 billion pound sterling to their quantitative easing programs that now stands at 745 billion.  Additionally, central bankers have called on governments to do more on the fiscal side.  In the US, the Trump administration introduced a trillion-dollar infrastructure spending bill, and it is also widely expected that the US congress will propose more stimulus in the coming weeks.  The continued support by global central banks is one of the cornerstones of this market rally, and it appears this support will be in place for some time.

One of the catalysts for the markets early in the month was the May Employment situation report.  It showed that 2.509 million non-farm payrolls were created during the month, which blew away the estimate of a loss of 8.5 million.  The report also showed a drop in the unemployment rate from 14.7% to 13.3%.  The same report at the end of June produced similar results with a better than expected print on non-farm payrolls, 4.8 million, and a continued decline in the unemployment rate to 11.1%.  Retail sales for May were also announced in June and crushed the consensus estimate coming it at 17.7%.  High-frequency data such as initial claims continued to paint the difficult situation many Americans face.  Unemployment claims continued to be high throughout the month while continuing claims were still reported north of 19 million, a real concern for economists.