Covid-19 infections continued to hobble the reopening of specific geographies around the world, while efforts to produce a vaccine continued to show positive progress.  Central banks were reasonably quiet during the month, keeping policy rates low and lending facilities in place.  The EU introduced more stimulus measures to aid their economies, while the US Congress continued to negotiate the 1 Trillion $ Heals act.  Economic data continued to be mixed, but on the margin seemed to regress given the rollback of several state’s reopening initiatives.  Financial markets were strong across the globe, with both equity and sovereign debt producing nice gains. Emerging markets led gains for the month with an increase of 9%.  Developed international markets were up 4.8%.  In the US, the S&P 500 gained 5.74%, the Dow rose 3.61%, the Russell 2000 added 5.57%, and the NASDAQ popped 7.37%.

Mega-cap Technology continued to show leadership throughout the months as many Tech companies announced better than expected second-quarter earnings.  US Treasury yields fell for the month.  The 2-year note yield fell five basis points to close at 0.10%, and the 10-year yield fell eleven basis points to close at 0.54%.  Bond prices gain as their yields fall.  Gold gained ~11% for the month closing at $1986.50 an Oz.  The precious metal’s price was aided by a weakening US dollar index that fell to a 2-year low.  Relative to the US dollar, Sterling gained 6.2%, the Japanese Yen gained 2%, and the Euro increased by 5.3%.  Oil traded fractionally higher for the month with WTI closing at $40.13 a barrel. 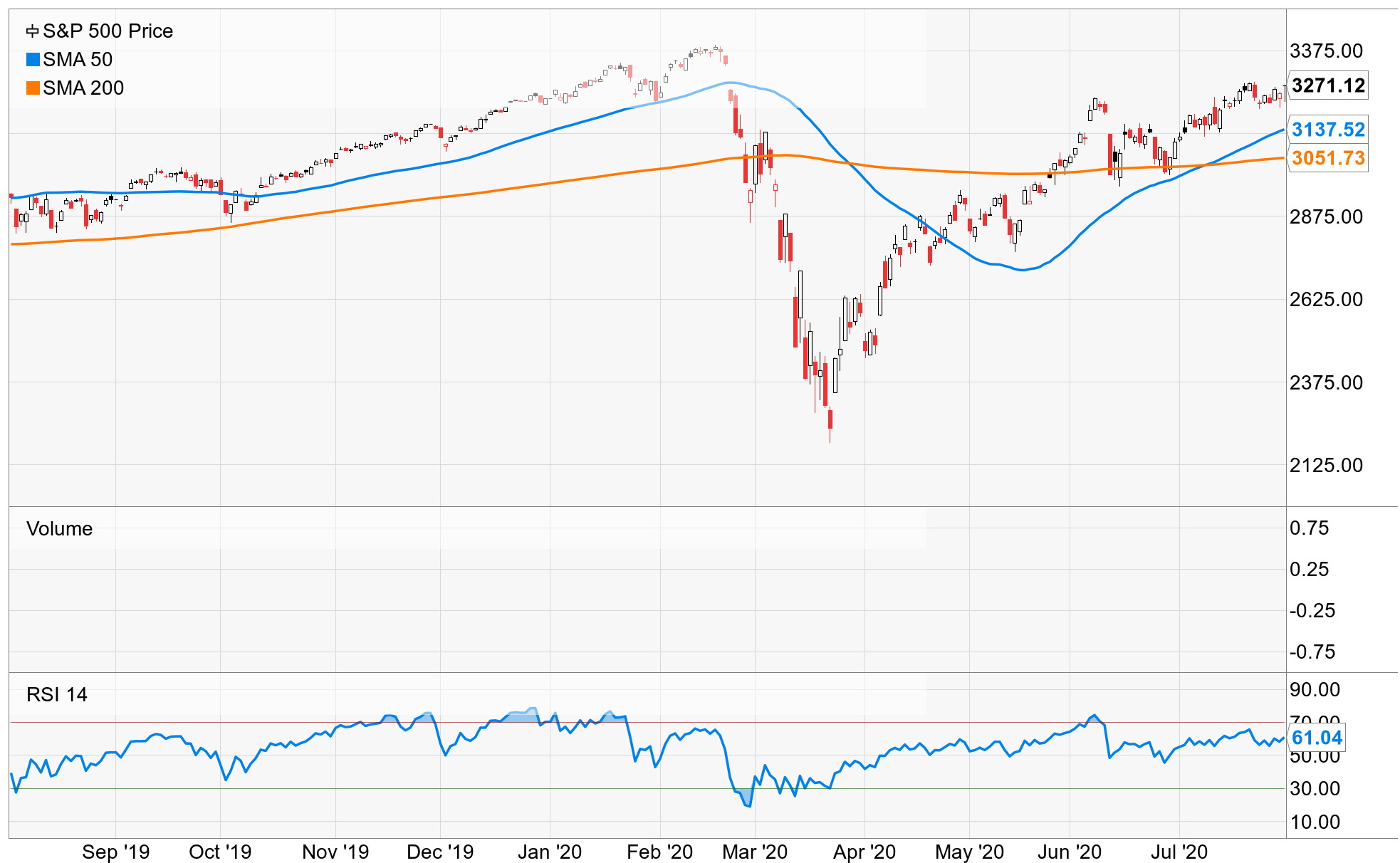 The coronavirus infection rate surged across the US Sunbelt during July and prompted state and local governments to curb and, in some cases, rollback initiatives to reopen their economies.  Globally, India and Brazil continued to be hot spots while Europe and China appeared to be doing better.  Several pharmaceutical and biotech companies have made substantial strides toward a vaccine, and some vaccines moved into Phase 3 human trials in the month.  Pfizer, AstraZeneca, and Moderna top the list.  It should be noted that the manufacturing of these potential vaccines also has started in mass- so that if and when they are approved, they will be ready to be administered in bulk right away.  The positive news helped propel the healthcare sector, which gained over 5% in July.

Global central banks continued to provide liquidity to the financial markets and, for the most part, left their policies unchanged.  In the US, the Federal Reserve kept its policy rate at 0-0.25% and announced that it would keep all of its lending facilities in place until at least the end of the year.  Jerome Powell, the Federal Reserve President, reiterated in his policy statement that the Fed was not even thinking about raising interest rates.  Central bankers did continue to call on their governments to do more on the fiscal side.  In Europe, the EU announced a 750 billion euro stimulus plan that provides EU members access to grants and loans. 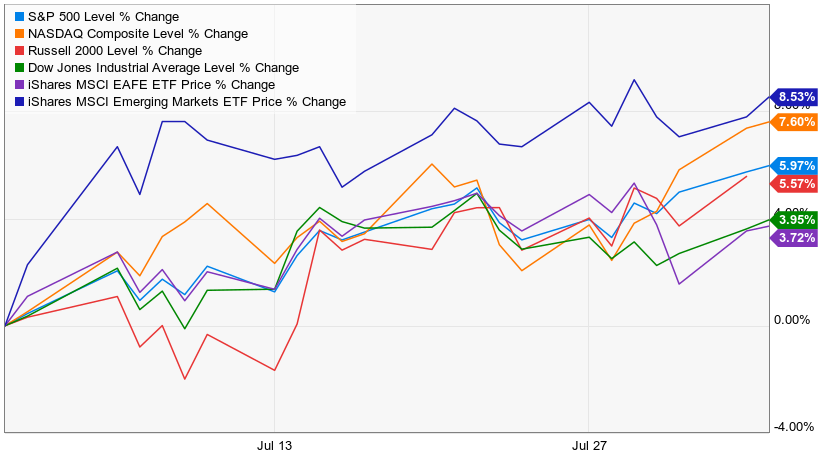 In the US, negotiations continue on a trillion-dollar stimulus plan.  Republican senators provided a draft of the Heals Act that would give aid to Schools and the healthcare system.  It would also provide funding for more Covid-19 testing.  Additionally, it would provide Americans with another $1200 direct stimulus check.  The draft fell short in democrat’s eyes concerning Liability Protection and the unemployment insurance supplement, which is marked to be reduced to $200 on top of the state benefit.  Stay tuned.

Economic data continued to be mixed and paint different pictures of the economy.  Retail sales announced during the month were robust, home prices were up nicely, Durable goods orders were strong, and Manufacturing and Services went into expansion mode.  On the other hand, we saw Q2 GDP fall 32.9% and watched initial unemployment claims exceed 1 million for the 18th week in a row.  In the first couple weeks of July, we saw continuing claims fall but subsequently regress above 18 million.  Consumer sentiment and confidence indicators also regressed as some states rolled back their reopening initiatives.